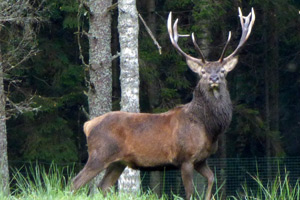 Red deer (Cervus elaphus)
Brief background:
Weight: males - up to 240 kg, females - up to 170 kgLength: males – up to 230 cm; at withers: 110-145 cm | females – up to 210 cm; at withers: 105-125 cmSexual maturity age: males ~ in the second year of life | females in the second or third year of life.Mating period: September-OctoberGestation period: ~ 8 months (235 days-245 days)Number of offspring: 1-2, born in May-JuneLifespan: 16-18 up to 20 yearsNatural predators: wolves, lynx, less commonly – bears; calves may be attacked by foxes as wellStatus of the species in Latvia: A widely distributed and very common species throughout the entire territory of Latvia. According to the data of the State Forest Service for 2019, the population of red deer in Latvia is approximately 62,000 individuals.

Where do they live? Red deer inhabit various forest biomes in Latvia, which are frequently mixed with forest clearings, meadows and agricultural lands. Representatives of the forestry sector and farmers are frequently angry with red deer, since biungulates tend to damage cultures that they have tended with the utmost care.

How do they live? Red deer are family and couple animals, furthermore, they are very conservative - only severe interferences can make them move away from their usual territory. If 6-12 individuals live together, it is impossible to live without a certain hierarchical structure. Only adult males without their herd lead a solitary life.

In autumn, during the mating period of red deer, loud bellowing is often heard in the forests - especially on clear and cold nights. This is the way male deer attract the attention of females, as well as notify their rivals of their strength, might and rights for mating. During the most active mating period, red deer males almost do not eat anything. Mating battles between the strongest bulls tend to be long and cruel.

The fur of newly born calves in spring is spotted with white spots - they are useful to hide in the surrounding environment. The female red deer with calf initially stays separated from the herd, but, when the young has grown up and become stronger to the degree where they can follow the herd, the mother with the calf joins her initial herd. The herd may disperse in autumn as the mating period starts and oldest bulls expel the youngest ones. Later they establish their own groups or herds.

What do they eat? Red deer are herbivores and ruminants - they swallow the food almost whole, without chewing. Later, at moments of rest, they regurgitate the swallowed food and thoroughly chew it to continue the digestion processes in the stomach.

Myths and truth The antlers of male elk already start developing during the first year of life. In adult males the antlers grow from May to July-August. During the growth process, the antlers are comparatively “soft” and covered with young, hairy skin. Later (in the first half of August) the bone crown solidifies and the skin is rubbed off it. Approximately 3 weeks before the beginning of the mating period, in September, the antlers are completely clean. Red deer shed their antlers in the time period from March until May. The number of branches on red deer bull antlers cannot be used to determine their age!